Welcome to the Solaris Blog! ヾ( ʚ̴̶̷  .̫ ʚ̴̶̷ )ﾉ”
And today we’re taking a look at yet another spooky figure release!
“But it’s summer!” Yeah, I know, but writers and summers don’t get along. So as it approaches, my only solace are the flowers, ice cream and the dream of fall just beyond the bad hair days.
Besides, once you see what figure I’m talking about, you too will wish it were November…because it’s Lilith Aensland from Darkstalkers, bishoujo-fied by Kotobukiya! Lilith completes the trinity of Darkstalkers femme fatales with a pose that matches in confidence to her overtly sexy counterpart, Morrigan Aensland.

Morrigan, by the way, is releasing at the end of July 2022, as hot as Japanese summer itself. Pre-orders are still open, so order now if you want this luscious piece!
Just a quick intro for those who are foreign to the world of button-masher games: Lilith and Morrigan Aensland are characters in the Darkstalkers (“Vampire” in Japan) series by Capcom. Design-wise, as you can see, Lilith is birds of a feather (…or maybe bats of a leather in this case?… ┐('～`;)┌)  with Morrigan, which could be seen as a quick and easy way to make a new character in a fighting game.
Lorewise, Lilith is a sentient fraction of Morrigan’s soul. The two are often portrayed as sisters by the fanbase, because it kind of makes sense. Morrigan fits the uninhibited onee-san type, while Lilith is the sweet and bubbly imouto-chan.
While Morrigan drips with sensuality, Lilith is full of energy and wonder, attributes that translate into unique and fun attack moves in the fighting game.
Personally, I find that Lilith’s lore is a genius meta take on design shortcuts gaining life and popularity of their own. Long before there was Saberface, there was Morriganface!
Illustrator Shunya Yamashita did an amazing job of turning pixels into anime art, so that Kotobukiya could work their magic and make Lilith into a 3D figure! 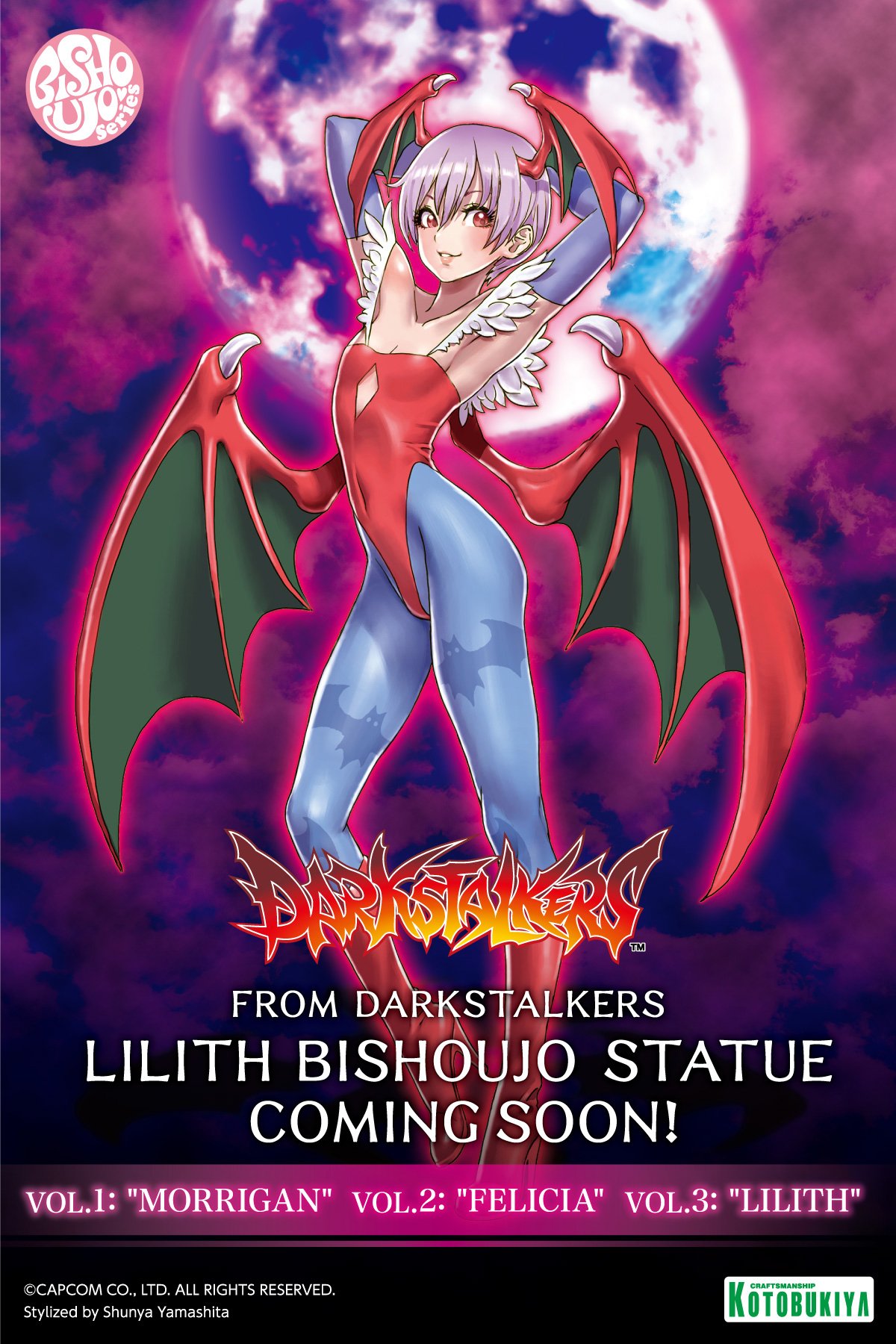 There’s nothing sexier than confidence, which Lilith is full of. Proud of her B-cups, she poses to flaunt them, because she’s beautiful all around! “Do you think I look cute?” she taunts with a playful gaze.
Also, Kotobukiya did a great job replicating the look of vinyl, fabric and leather: glossy and matte in all the right places, to show the lithe body of an adorable succubus. Her color palette is bold and bright: soft pastels for her hair and tights, side by side with blood-red wings, leotard and boots. She has a base similar to her sister’s, made to look like stones that incandesce to each of her steps. Don’t underestimate cute: even though she’s just a fraction of Morrigan, she’s still a very powerful succubus! When she’s underlit like this, you can actually see the mischief in her eyes.
Well, to be honest, you could see it before, too. That is actually one of my favorite points of Kotobukiya’s Bishoujo style: how the figures’ expressions are a balance of innocence and mischief. If you look at other figures in the series, you’ll notice how most of their bishoujos seem to have a +1 to their personality. Villains suddenly feel sweet, while heroines suddenly feel whimsically playful. Maybe it’s the eyes, maybe it’s the pin-up style pose…either way, I love it. Then you get characters like Lilith, in whom those two traits converge and no other design feels right. I have accepted Bishoujo Lilith as her canon appearance and nothing will change my mind now. This adorable figure of Lilith Aensland by Kotobukiya will be released at the end of November 2022. Pre-orders are currently open!
And there is still time to order the other bubbly Darkstalker, Felicia! If you haven’t already, check her out at our store. She will be released at the end of September 2022. With our Solaris Loyalty Points, you can save up when ordering these beautiful girls. And you can save even more if you subscribe to our newsletter and follow us on Instagram! Early Birds, Shop Exclusives and Special Offers are all delivered straight into your mailbox and newsfeed, so you don’t miss anything.
We hope you enjoyed this one!